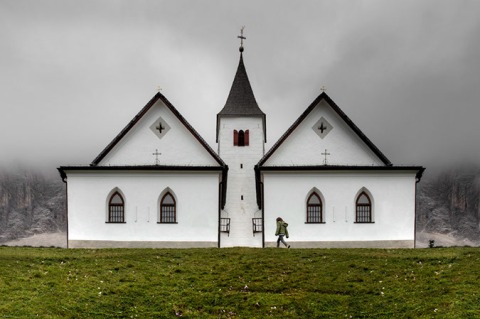 You could say that The Master picks up where There Will Be Blood leaves off. By the Forties, long after the great religious revivals and reforms, after the land has been tamed and settled, the railroads and cities built, the gold mined, the oceans of oil tapped and the fortunes of the Carnegies and Dohenys and Vanderbilts made and ensconced in legend, a mounting standardization, desperation, and rancidness has set in, and another war has left men shattered. The only conceivable frontier is within: the liberation of the self from routines, possessions, and habits of mind, whether they’ve been inculcated by trauma or affluence.

From a purely movie history standpoint, Anderson begins in the land of film noir. We are placed side by side with the kind of troubled vet who populated those films; or, to put it more accurately, with the full-blown realization of what could only be hinted at with William Bendix’s Buzz in The Blue Dahlia or George Cooper’s Mitch in Crossfire, as if their largely unseen but implied actual existences were being opened up to the light of day, one painful section at a time. Freddie exists not in the tightly boxed-in compositions and poetically approximate pulp fictions of The Dark Corner or The Killers but in a series of grand ellipses, isolated stretches of behavior and activity made possible by the careful nurturing, cultivation, and harvesting of the unpredictable, in a gloriously breathable and expansive film image which stands in stark contrast to what we have grown used to seeing on movie screens over the past five years. Anderson remains profoundly inspired by the Seventies, by Altman, Malick, the best of Ashby, and the Polanski of Chinatown, but reverence has given way to authority. Those movies are no longer merely evoked, but understood by those who know them as components of what has become this artist’s proper language.

As Freddie tries and fails to fit in with his fellow sailors (in imagery that immediately recalls The Thin Red Line but reverberates with more unsettling overtones), plies his newly learned trade of department-store portrait photographer, seduces his co-worker, toils as a migrant laborer, and blends his own special alcoholic potions (the most intriguing of which involves paint thinner filtered through a loaf of bread), the question arises: what will become of this man who seems destined to fall through the cracks? By the time he sneaks aboard Dodd’s “borrowed” yacht, we might find ourselves expecting an epic of regeneration. But when Dodd and Freddie meet, we understand that something else is at work: namely, the sparking of a tension, both specific to these characters and general to the world they inhabit, that is finally unresolvable. This is not Freud and the Wolf-Man. This is more like Strasberg and Marilyn Monroe.

Freddie is not so much played as nuzzled, and jerked into being by Joaquin Phoenix. I’m Still Here aside, Phoenix’s Freddie seems like genuinely damaged goods. He and his director feel their way into this man-in-a-bind from the inside out, and they establish his estrangement from others in those opening scenes through awkward smiles and out-of-sync body language alone. A lot is made of Phoenix’s wiry physique and misshapen upper lip, which seems to direct the tilt of his head up and away from whoever he happens to be talking to through a clenched mouth as he feigns an air of skepticism which covers an urge to run. He handles objects with the fragile tentativeness of a child, and his gait is so furiously deliberate and imbalanced that he seems to be avoiding spastic convulsions. This is a performance with a difference, the behavioral creation of an actor and a director with a fierce devotion to the ragged, the unkempt, the authorless.  read more

You are currently reading Inability to tolerate empty space limits the amount of space available at my nerves are bad to-night.