I’m only waiting for my cue, I’m a stranger here myself 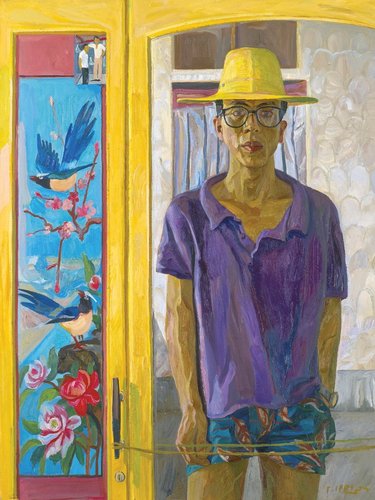 After I received the photographs I looked at them for a long time. Here was, after all, visual proof of small parts of the life of a man I had never met, a man who was one of my grandfathers. I had not known my grandfathers (they had both died before I was born), so the concept – a father figure once removed – itself seemed strange to me. All these photographs, I figured, would surely tell me something about my grandfather, wouldn’t they? How can 25 photographs not say anything?

In various of the photographs, Josef Nowak is seen holding and/or playing an instrument, mostly an accordion. There are various group portraits, and there even is a photograph of an actual performance. My grandfather must have loved music. In many of the photographs, he strikes an almost comic figure, with his large round glasses, his slightly bewildered look in his eyes, and those ears that seem stick out just a tad too much. At times, my grandfather looked like the Zelig character in the eponymous movie, the person who somehow was everywhere, without actually belonging there. My grandfather, in other words, was the kind of person you wouldn’t really have to mark in a photograph. You’d notice that one guy sticking out anyway.

There is an exception to that rule. One photograph shows him in a field hospital, another group photograph. His right hand is bandaged, and the goofiness in his face seems gone. He also suddenly looks much younger, possibly because his uniform jacket is open, and his stance is more casual.

Every photographs tells a story, the old adage goes. It’s a wonderful cliché, it’s a horrible cliché, and it’s most certainly not true. What stories do these photographs of my grandfather tell me? Having looked at them for so long now (a few years) I’m still not an inch closer to knowing anything about the man. He loved music, I wrote. How would I know that? All I can really know from the photographs is that he knew how to competently hold an instrument and, possibly, play it. Everything else I added on top.  read more

You are currently reading I’m only waiting for my cue, I’m a stranger here myself at my nerves are bad to-night.